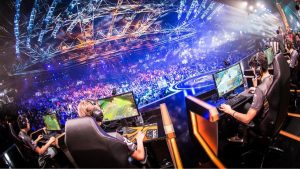 Summary: Competitive gaming has gone from a hobby people would partake in on the weekends to a lucrative profession over the past decade.

For a long time video games were considered a hobby or something you could play to pass the time. Video games have been developed for a number of systems, such as your desktop at home, the console you have plugged into your television, and even the cellphone you take everywhere with you.

Over the years the video game industry has erupted into a major form of entertainment, with plenty of new releases coming out each month. While the industry has grown, so has the competitive scene. What was once only considered a hobby is now a legitimate form of making money for several people around the world.

Multiplayer games have been around for a long time but having the ability to play with others online has come a long way over the past decade, In the past, if you wanted to play games with others you had to meet up with them in-person to set everything up. Now, for most multiplayer games, all you need is a solid internet connection. In an online match you could be grouped up with someone down the street and someone on the other side of the world. This kind of gameplay has only become more seamless over the years, with some games even allowing cross-platform play.

The internet has made it much easier for people to get in touch with others who have similar interests. Even though competitive gaming had previously been regarded as a somewhat niche hobby, social media and streaming services have made it incredibly easy for communities to come together. You can easily learn more about a particular game and follow a competition.