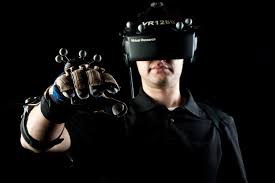 Virtual Reality is being hailed as the next big thing in tech. The highlight of the last Consumer Electronics Show was every company showing or announcing their VR plans. Even Apple is rumored to have up to 800 people working on some form of virtual reality tech. At present there are two products on the horizon which are generating the most buzz. The two products are by Oculus and HTC.

The Oculus rift is a head mounted virtual reality stereoscopic 3D display. You get a controller and can look around in every direction. However, VR is more than just about games. While gaming is the primary draw, the ability to look around in 3D limited mostly to cockpit based interactions. You can be in the cockpit of a fighter and can actually look around for enemy fighters. The other two uses for VR are movies and exploration. With exploration you can explore any location in the world in 3D. Think of it as an upgraded version of Google streetview. When it comes to movies, you can simulate being in an IMAX size cinema. It could possibly be the future of movie watching from the home.

The HTC Vive takes the above one step further. In addition to watching movies etc the gaming on the Vive has a new angle to it. It requires a room with a minimum size of 9 by 12 feet. Sensors are placed along the edges of the walls and you get two controllers. The games are different in that you can now move around this virtual area.

The demos of these games have been called “game-changing” by the tech media. However, it remains to be seen if these are mass market products.